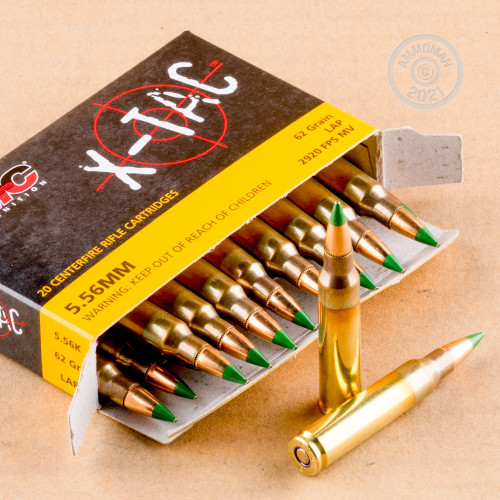 Posted by Tiger Tactical Technologies on 8/9/2021 to
If your an avid shooter, a first time AR owner, or a forum lurker chances are you've hear about green tipped ammo at some point or another. There is a wealth of information regarding green tips scattered all across the internet, and most of that information is accurate; but there are some commonly held misconceptions. Let's get down to the Brass tacks about this brass.
History of the M855 Cartridge.
Originally named the SS109 by it's Belgian manufacturer, the "Green-Tipped" ammo was officially designated as the M855 cartridge by the U.S. military after it was selected by NATO in the 1980s.
So what is a M855 round?
The M855, also colloquially referred to as Penetrator rounds is a 5.56x45mm 62 Grain Full Metal Jacket Lead Alloy round with a Steel Core and a signature green colored tip. This round has served and continues to serve many countries, with the U.S. being it's most well known user.
Are Green Tips Armor Piercing Rounds?
A commonly held misconception is that green tip rounds are armor piercing. M855 rounds are (luckily) not classified as AP rounds by the ATF boiis.... Nonetheless it is still a extremely capable round and capable of penetrating steel plates. In fact, one of the requirements for the M855 round during it's selection process, the U.S. military required that the round be able to penetrate soviet steel helmets at extended ranges.
Are Green Tipped Rounds Illegal?
No, they are perfectly legal.
So What's The Big Deal?
Perhaps more than any other reason, Green-Tips became widely talked about in gun circles when the Obama administration tried to ban M855 rounds under the pretense of the round being a dangerous armor piercing round that you definitely shouldn't own if your a law abiding citizens. According to one of Obama's surrogates, the M855  was blamed for "most" mass shootings, a patently absurd and false claim, and for presenting a undue threat to law enforcement. During the time of the proposed ban, 40 years of FBI crime statistics failed to yield a single example of a mass shooting where M855s were present, nor were there cases of M855s being used against law enforcement. As the push for banning M855s intensified, rumors started to spread about the mythical' "green tip" armor piercing round - illegal for civilians to own. '
Obama's Gone, Why The History Lesson?
The story of the M855 concludes with a happy ending, one where "we the people" won a battle against the gun grabbers, but not the war. The proposed M855ban hit a screeching halt, only after freedom loving patriot's let there voices be heard during the BATF's request for public comment. The BATF ruled green tips are not armor piercing like black tips and the proposed ban was thwarted. This goes to show it pays to give a sh*t, even if things look bad. This is especially relevant during trying times where there's a new (would-be) Gun Grabber In Chief launching a new assault on our rights. Next time there's a call for public comment, let your voices be heard, regardless of what the ban hammer is aimed towards, you might not care about bump stocks or own any pistol braces, or whatever, an infringement is an infringement, and letting one infringement pass only opens the door for many more to come.
Back To M855 Green Tips
M855 Steel Core Green Tipped SS109 Penetrator 5.56NATO 62 Grain rounds might not be armor piercing, or illegal, but in our view it's a great round and can usually be had for a decent price. We like it for mag dumping sessions, it's great for folks that like to shoot a lot and shoot often without breaking the bank. Brands like Federal, and PMC X-Tac  make very consistent rounds, with consistency appreciated by the armed forces. Bargain hunters can rejoice at surplus M855 rounds that can often be found for very cheap; just make sure the rounds weren't manufactured too long ago. Now for the real bargain hunters that made it through this post, use promo code Just-The-Tip and get $5.56 of any order.
Coupon only valid for first 45 customers. Sign up for our email list and get new promo codes sent out to you every month, as well as first dibs on fast selling products before they're listed on the site.
Previous Post