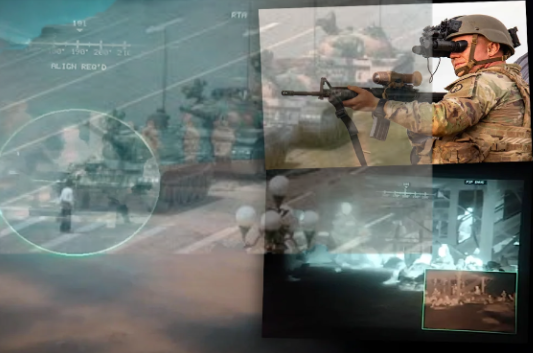 Posted by Komrade Barry ??????? on 2/4/2022 to Premier Psaki's National Performance Radio
Greetings Comrades , it is I your friendly Build Back Better commisar. The next generation of equipment meant for the warfighter promise to be insane! Imagine, NVG, Thermal Sighting, and Weapon Aiming cameras seamlessly painting a picture of the battlefield via augmented reality goggles. New possibilities arise, such technological developments promise to allow one to accomplish feats such as hip firing on targets at distance with accuracy. Are you guys eager to use this new technologies for good and not against political rivals? I sure am!

I can't wait to remove troops from their unfiltered perception of diorty unfiltered reality and present them with a logarithmically "enhanced" view of reality - like comrade Binger did against the white supremacist butcher of Kenosha.

No longer will we be slaves to those annoying soldiers with their morals and ethics that prevent them from being good patriotic citizens and crack down on unarmed peaceful protesters. No longer, will our righteous field marshalls be tasked with carrying out requests presented by the Department of inJustice to execute unmasked toddlers.

Nyet comrades, our righteous field marshalls need only deploy our glorious people's militia against armed counter revolutionaries opposed to Premier Biden's Build Back Better Revolution. Those aren't kids, those are anti Democratic militants training their gauss-mortars to strike a orphanage for refugees. We won't even have to hide the mutilated bodies anymore, we'll just airbrush them out. It is a shame that friend of the people Deng Xiaoping did not have access to such wonderful technology in 1989 when the people's tanks lacked the proper optics to recognize the terrorist subversive "Tank-Man" and neutralize the threat from afar before it was too late and the tank column was in effecteive range of Tank Man's wire guided ATGM missiles, which were mistook to be harmless plastic bags.
Next Post